60th Anniversary of Dr No

Today we celebrate the 60th anniversary of Dr No, the novel that inspired the first James Bond film, starring Sean Connery and Ursula Andress.  Ian Fleming’s sixth James Bond novel was first published in the UK on 31st March 1958 and inspired mixed reviews.  TIME called it ‘Magnificent writing’ whilst a review from Paul Johnson at the New Statesman labelled it as ‘without doubt, the nastiest book I have ever read… Sex sadism and snobbery.’  But perhaps it is the Observer‘s description of ‘the usual sado-masochistic free-for-all, plus octopuses’ which best sums up this off-the-wall Bond adventure.

Whilst the novel divides critics, it undoubtedly contains one of the most gripping and tense pieces of writing to be found in the entire Bond series.  Bond is sent to Jamaica to investigate the disappearance of Strangways and Trueblood, the two British agents on the ground in Kingston.  At first their disappearance is dismissed as an elopement but Bond soon picks up a trail leading to Crab Key Island, the home of the mysterious Dr No.  As Bond’s investigation sharpens focus, his life is threatened and even the ferocious natural world seems to turn against him.  Here we join Bond the evening before he embarks on his mission to infiltrate Crab Key.

‘Bond drank his second drink and thought over the details of his plan. Then he went down and had dinner in the half-deserted dining-room and read the Handbook of the West Indies. By nine o’clock he was half asleep. He went back to his room and packed his bag ready for the morning. He telephoned down and arranged to be called at five-thirty. Then he bolted the door on the inside, and also shut and bolted the slatted jalousies across the windows. It would mean a hot, stuffy night. That couldn’t be helped. Bond climbed naked under the single cotton sheet and turned over on his left side and slipped his right hand on to the butt of the Walther PPK under the pillow. In five minutes he was asleep.

The next thing Bond knew was that it was three o’clock in the morning. He knew it was three o’clock because the luminous dial of his watch was close to his face. He lay absolutely still. There was not a sound in the room. He strained his ears. Outside, too, it was deathly quiet. Far in the distance a dog started to bark. Other dogs joined in and there was a brief hysterical chorus which stopped as suddenly as it had begun. Then it was quite quiet again. The moon coming through the slats in the jalousies threw black and white bars across the corner of the room next to his bed. It was as if he was lying in a cage. What had woken him up? Bond moved softly, preparing to slip out of bed.

Bond stopped moving. He stopped as dead as a live man can.

Something had stirred on his right ankle. Now it was moving up the inside of his shin. Bond could feel the hairs on his leg being parted. It was an insect of some sort. A very big one. It was long, five or six inches – as long as his hand. He could feel dozens of tiny feet lightly touching his skin. What was it?

Then Bond heard something he had never heard before – the sound of the hair on his head rasping up on the pillow. Bond analysed the noise. It couldn’t be! It simply couldn’t! Yes, his hair was standing on end. Bond could even feel the cool air reaching his scalp between the hairs. How extraordinary! How very extraordinary! He had always thought it was a figure of speech. But why? Why was it happening to him?

The thing on his leg moved. Suddenly Bond realized that he was afraid, terrified. His instincts, even before they had communicated with his brain, had told his body that he had a centipede on him.

Bond lay frozen. He had once seen a tropical centipede in a bottle of spirit on the shelf in a museum. It had been pale brown and very flat and five or six inches long – about the length of this one. On either side of the blunt head there had been curved poison claws. The label on the bottle had said that its poison was mortal if it hit an artery. Bond had looked curiously at the corkscrew of dead cuticle and had moved on.

The centipede had reached his knee. It was starting up his thigh. Whatever happened he mustn’t move, mustn’t even tremble. Bond’s whole consciousness had drained down to the two rows of softly creeping feet. Now they had reached his flank. God, it was turning down towards his groin! Bond set his teeth! Supposing it liked the warmth there! Supposing it tried to crawl into the crevices! Could he stand it? Supposing it chose that place to bite? Bond could feel it questing amongst the first hairs. It tickled. The skin on Bond’s belly fluttered. There was nothing he could do to control it. But now the thing was turning up and along his stomach. Its feet were gripping tighter to prevent it falling. Now it was at his heart. If it bit there, surely it would kill him. The centipede trampled steadily on through the thin hairs on Bond’s right breast up to his collarbone. It stopped. What was it doing? Bond could feel the blunt head questing blindly to and fro. What was it looking for? Was there room between his skin and the sheet for it to get through? Dare he lift the sheet an inch to help it. No. Never! The animal was at the base of his jugular. Perhaps it was intrigued by the heavy pulse there. Christ, if only he could control the pumping of his blood. Damn you! Bond tried to com-municate with the centipede. It’s nothing. It’s not dangerous, that pulse. It means you no harm. Get on out into the fresh air!

As if the beast had heard, it moved on up the column of the neck and into the stubble on Bond’s chin. Now it was at the corner of his mouth, tickling madly. On it went, up along the nose. Now he could feel its whole weight and length. Softly Bond closed his eyes. Two by two the pairs of feet, moving alternately, trampled across his right eyelid. When it got off his eye, should he take a chance and shake it off – rely on its feet slipping in his sweat? No, for God’s sake! The grip of the feet was endless. He might shake one lot off, but not the rest.

With incredible deliberation the huge insect ambled across Bond’s forehead. It stopped below the hair. What the hell was it doing now? Bond could feel it nuzzling at his skin. It was drinking! Drinking the beads of salt sweat. Bond was sure of it. For minutes it hardly moved. Bond felt weak with the tension. He could feel the sweat pouring off the rest of his body on to the sheet. In a second his limbs would start to tremble. He could feel it coming on. He would start to shake with an ague of fear. Could he control it, could he? Bond lay and waited, the breath coming softly through his open, snarling mouth.

The centipede started to move again. It walked into the forest of hair. Bond could feel the roots being pushed aside as it forced its way along. Would it like it there? Would it settle down? How did centipedes sleep? Curled up, or at full length? The tiny centipedes he had known as a child, the ones that always seemed to find their way up the plughole into the empty bath, curled up when you touched them. Now it had come to where his head lay against the sheet.

Would it walk out on to the pillow or would it stay on in the warm forest? The centipede stopped. Out! OUT! Bond’s nerves screamed at it.

The centipede stirred. Slowly it walked out of his hair on to the pillow.

Bond waited a second. Now he could hear the rows of feet picking softly at the cotton. It was a tiny scraping noise, like soft fingernails.

With a crash that shook the room Bond’s body jack-knifed out of bed and on to the floor.

At once Bond was on his feet and at the door. He turned on the light. He found he was shaking uncontrol-lably. He staggered to the bed. There it was crawling out of sight over the edge of the pillow. Bond’s first instinct was to twitch the pillow on to the floor. He controlled himself, waiting for his nerves to quieten. Then softly, deliberately, he picked up the pillow by one corner and walked into the middle of the room and dropped it. The centipede came out from under the pillow. It started to snake swiftly away across the matting. Now Bond was uninterested. He looked round for something to kill it with. Slowly he went and picked up a shoe and came back. The danger was past. His mind was now wondering how the centipede had got into his bed. He lifted the shoe and slowly, almost carelessly, smashed it down. He heard the crack of the hard carapace.

The centipede was whipping from side to side in its agony – five inches of grey-brown, shiny death. Bond hit it again. It burst open, yellowly.

Bond dropped the shoe and ran for the bathroom and was violently sick.’

Sixty years on from Dr No‘s introduction to the world, why not discover it for yourself and decide which reviews you side with. 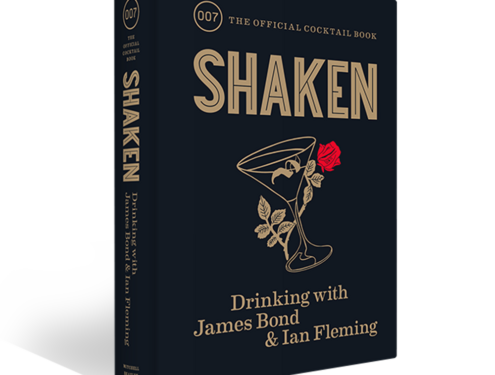