John Pearson occupies a unique role in the world of Bond. He has the distinction of being not just James Bond’s only authorised biographer, but also the first person to publish a book about Ian Fleming. Not many people can say they have written the biography of both a fictional character and their creator. But of course, there are many areas where the two overlap. Pearson was ideally placed to chart these areas of overlap – the ways in which Ian Fleming and only Ian Fleming could have created a character such as Bond – as he had the advantage of knowing Fleming personally. As a young man, he worked as Fleming’s assistant at the Sunday Times, where together they produced the Atticus column. In 1966, two years after Fleming’s death, he published his celebrated work The Life of Ian Fleming. Now, for the first time, Pearson’s meticulous biographical research is being published. Ian Fleming – The Notes charts not only Fleming’s life – including fascinating details that never made it into the finished biography – but Pearson’s own journey while investigating his subject. Despite the title, the volume is not merely a series of ‘notes’, but rather a book about writing a book. Compelling, insightful, irreverent and written in John Pearson’s inimitable style, it makes an outstanding read.

Appropriately, Ian Fleming – The Notes is being published by Queen Anne Press, which was managed in its earliest days by Fleming himself. It is available in two beautifully-bound limited editions, both of which feature an introduction by Fergus Fleming:

To register interest in purchasing a copy, please email info@queenannepress.com.

More information about John Pearson’s life and works can be found at his official website and Facebook page. The Regular Edition is bound in dark-blue Plike paper with gold blocking and wrapped in a semi-opaque dust jacket. Detail of the blocking on the front board of the Regular Edition.

As a taster, here’s an extract from John’s interview with Admiral Godfrey, Fleming’s boss at Naval Intelligence and reputedly the model for ‘M’.

‘I’ll be wearing a check cap and will meet you off the 9.45 at Eastbourne Central,’ he had said. And there he was, a large, pink-faced man in his early seventies with heavy brown shoes and a grey Rover car. ‘Don’t judge John Godfrey by what he looks like now,’ Harling had said. ‘In his day he was formidable. Very formidable indeed. Since then, of course, he’s had a heart attack and he’s nothing like the man he was.’

But it wasn’t just a heart attack and the passage of a quarter of a century that accounted for the sadness of the occasion. It was partly that he had this air of helplessness, of the best part of life being over, that all naval officers seem to have when they retire. Those brown shoes haunted me throughout the interview.

But more than this, of course, was the fact that Fleming had so grossly oversold the product. Instead of the steely-eyed ‘M’ with his ruthlessness and his wealth and his deeply-lined face, there was this sad old man who found difficulty getting the car parked and looked like Cecil Parker.

The only surviving piece of M-ness one could see were the eyes. They were very pale blue, very cool.’ 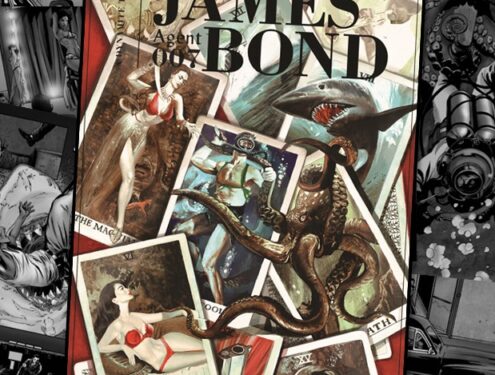 Live and Let Die The Graphic Novel Read more
Next