THE WRITER, THE SPY AND THE SILVER BEAST – JOHN GARDNER’S 007

John Gardner’s first published book was the autobiographical work Spin the Bottle (1964) and while he never returned to non-fiction writing he strove to bring reality, the real world, and a sense of verisimilitude into his work – especially his fourteen original James Bond novels. Upon reflection, Gardner cited his eleventh Bond novel, 1991’s The Man from Barbarossa, as the best of his 007 adventures. Crucially, this is the novel that is the most grounded in then-current events, with Bond thrown into the very timely Middle East conflicts, as well the book correctly anticipating the close of the Cold War. Despite the thrilling, inventive narratives in his stories, Gardner was no fantasist. In his hands, the world’s most famous secret agent fought for Queen and country in a world readers could relate to.

Having previously worked as both a stage magician and Royal Marine officer (amongst other jobs), John Gardner was a hands-on man and it was important to him that the gadgets in his Bond stories be grounded and plausible. In the acknowledgements to 1981’s Licence Renewed Gardner states, “I would like to point out to any unbelievers that all the ‘hardware’ used by Mr Bond in this story is genuine. Everything provided by Q Branch and carried by Bond – even the modification to Mr Bond’s Saab – is obtainable on either the open, or clandestine, markets.”

For his tech research, Gardner spent his own time and money speaking to those in the know and actually getting to handle and experience the equipment on the bleeding edge of covert operations.

“One of the things that he wanted to do right from the word go,” explains John Gardner’s son, Simon, “was to make sure that at least 90% of the gadgets were real and could be obtained. At the time he was using a place on South Audley Street called CCS [Communication Controls Systems Ltd; today known as Security Intelligence Technology Group] and those guys were the ones he did a lot of work with.

“He wanted to show that someone like Bond would have, as he put it, ‘trade craft’. He’d have loved certain things and he would have known how to do certain things. I think he wanted to try and get Bond to become a real person as opposed to this kind of fantasy character. He was trying to bring him back to the reality of espionage. There were a lot of fans who didn’t like that. They simply wanted to see the Bond of the films… He said, okay, if I’m going to do Bond I want to try and do it as much my way as possible, which means that the trade craft has to be right and the gadgets have to be believable. That was his starting point.”

It is the aforementioned Saab that is one of John Gardner’s most famous contributions to the 007 canon. Motoring and James Bond’s licence to drive has always been an essential and beloved part of the adventures and the decision to put him into the Swedish automobile classic turned a lot of heads in 1981. The very first sentence Gardner writes Bond into (in Licence Renewed) has him driving the mid-size, four-cylinder car: “James Bond shifted down into third gear, drifted the Saab 900 Turbo into a tight left-hand turn, clinging to the grass shoulder, then put on a fraction more power to bring the car out of the bend.”

007’s car of choice was named ‘The Silver Beast’ and was of course equipped with special hidden features, such as bulletproof glass, rotating licence plates, tear gas ducts, steel-reinforced bumpers, hidden compartments for handguns, a mobile phone and much more. In the prose, Gardner namedrops CCS as the company who personalized the car for Bond but to further underline that the world of James Bond was now ‘our world’, Saab went ahead and created The Silver Beast themselves. This one-of-a-kind machine made the regional news, with John himself showcasing its bespoke additions:

Not only was this a wonderful marketing opportunity but it spoke to how so many fans of 007 see the character – as aspirational. You may not be taking on globe-trotting missions, but you can drink the drink, wear the suit and now buy the car!  Gardner was tasked with bridging the gap between an idealized pop culture version of James Bond circa the late 1970s/early 1908s and a readership that was very different to 1953 (when Casino Royale was published). “History is moving pretty quickly these days,” said Ian Fleming and – like so many situations Bond finds himself in – John Gardner was in the right place at the right time, making him the perfect author for 007 in 1981.

In total he would write fourteen original Bond novels, plus two movie novelisations, landing him a spot in the Guinness World Records:

In 2021 we celebrate the 40th anniversary of his first James Bond adventure, Licence Renewed, with a new edition by Orion – available now. 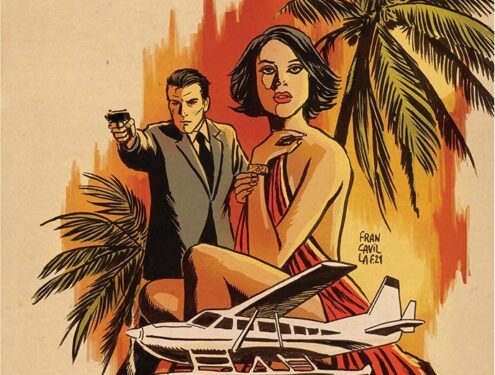 James Bond: Himeros In Stores This October! Read more
Next
Ian Fleming to appear in new video game Read more
Sign up to
our newsletter