Born in New York City to Hungarian Jewish immigrants, Glaser’s influence on the American visual landscape cannot be overstated. His prolific career spanned over 60 years, and in 2009 he became the first graphic designer to be awarded the National Medal of Arts.

Glaser’s output was as eclectic as it was striking. He created the logos for DC Comics, for Brooklyn Brewery, and for New York magazine – which he also co-founded. He designed over 400 posters, including an album poster for Bob Dylan, the poster for Tony Kushner’s Pulitzer-winning play, Angels in America, and the poster for the 1984 Winter Olympics.

However, he is undoubtedly most famous for the ‘I♥NY’ logo he created in 1977 to promote tourism and civic pride – an image so deceptively simple and so ubiquitous it’s easy to forget that someone actually designed it, it didn’t spring spontaneously into being. Like 007 (both the phrase and the character), the logo has become a cultural phenomenon, globally recognised, frequently referenced or parodied, instantly familiar. A true icon.

So it makes sense, that Milton Glaser has a tangible connection to James Bond.

In 1959 and 1960, between work on the manuscripts for Goldfinger and For Your Eyes Only, Ian Fleming travelled to thirteen cities around the world, documenting his impressions in a series of articles for The Sunday Times. Edited versions of these articles were published in the UK as Thrilling Cities in 1963. When the New American Library edition followed in 1964, it boasted jacket artwork by Glaser’s own design company, Push Pin Studios. The jacket, seen below, depicts a battered suitcase sporting a playful collection of stickers – a skull, a bikini-clad woman, the ace of spades – evoking the glamour of Fleming’s famous secret agent.

It is somewhat ironic, of course, that the designer whose name is indelibly linked with his love for NY should have illustrated this particular book. Fleming’s chapter on the city is famously damning, opening as it does with the words, ‘I enjoyed myself least of all in New York‘. He goes on to conclude that the city is ‘rapidly losing its heart‘. We will never know what Glaser made of this pronouncement. But thanks to his timeless design, nobody else will truly be able to claim that New York lacks ♥.

Fleming himself refused to soften his words for an American audience, despite requests from his US publisher. Instead, gave the city a peace-offering, in the form of a James Bond short story titled 007 In New York. This was included in the US edition of Thrilling Cities, with an introduction conceding that Bond’s ‘tastes and responses are not always my own and [his] recent minor adventure in New York […] may prove more cheerful in the reading‘ – Fleming’s apology, and a gift, to the city that had hosted him so often.

Milton Glaser also left behind many gifts to his beloved city. He died whilst working on yet another. His final creation, harking back to the origins of I♥NY, is a typographical treatment of the word ‘together‘: a bequest to a city, and a world, in the throes of tumultuous change. The world today is not the world recorded in snapshots by Fleming in 1960, and Glaser’s contributions to Thrilling Cities represent a tiny fraction of his overall legacy. But like 007, Glaser’s cultural icons will long outlive their creator. 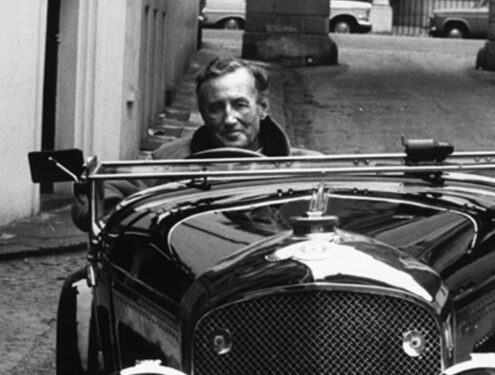